Welcome To this video Tutorial where I will be showing You how You can create a 360-degree image using Your smartphone in just a few steps.

Whether it is an android or IOS phone, this hack got You covered.

We’ll be making use of the Google street view app.

It’s important to note that the street view app is best used for Outdoors and open spaces.

Also, I want You to note that this is best used as a foot in the door strategy for Your clients.

Here is what I mean, let’s say You get a client in the restaurant Niche; and You want to display the Power of VideoTours 360 and how you can use a Virtual Tour to Boost his traffic, get more leads and increase sales.

You can use this hack I am about to show you to give the client a demo of the Tour and showcase all the awesome features you’ll be setting up for him.

This will give the client a feel of what the deal will look like.

So, Once You close this client, I will advise you to go ahead to get a 360-degree camera to create the images you’ll be using for the real project for the sake of professionalism and a premium outcome.

Free Marketing Tip: The Camera can also be included as part of the offer You give to the clients.

Let’s say a client gets to pay $2,000 for a Virtual Tour gig and You give the client a 360-degree camera as a bonus, the client will love it even more.

Here are some good 360-degree camera:

First Download the Google Street View app from Google Play or AppStore. The process is almost the same on both operating systems

Install the app and pick up an interesting spot to try it. After a few screens with tips and welcome messages, you’ll arrive at the homepage of the app.

After selecting “create,” you’ll be taken to the camera screen. The app will guide you through the capture process – essentially, the user has to stand still, and ensure your foot maintains one position as You rotate with the camera. Hold the device in the right position, point the camera at the dot, and hit all orange circles appearing on the screen. 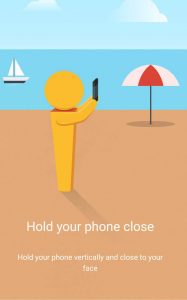 The App will Automatically begin stitching all images to create a 360-degree panorama. The progress is indicated by an orange loading bar at the bottom of the screen. As soon as the process is completed, the app will notify you by indicating that your 360 photo is “ready to publish.”

The images are now stitched together into one 360 image. While you are able to preview the raw version of the image on both Android and iOS devices, there are some differences in how you access them. Android and iOS users will need to press the “private tab” click on your image and press the “share icon”, and choose “share privately”, then save the image or send it using your Gmail app

That’s it for creating a 360-degree image with Your smartphone, from your smartphone you can, Upload your image to Video Tours 360°, but it will be easier for you from a desktop computer.

Send your image by email, and download it to your desktop, then you upload it to Video Tours 360

Was this article helpful?